The Seaside Heights Volunteer Fire Co. No. 1 marked its 100th year of service in 2013 - the same year that the Borough of Seaside Heights celebrated its Centennial. For many reasons the history of the fire company evolved hand in hand with the early history of Seaside Heights. As the new town quickly took shape, many of the same men who were instrumental in forming the municipal government and developing a vision for the town's growth saw the need for a well-equipped fire company. But in addition to fulfilling its core firefighting mission, the fire company was crucial to the fledgling town's social relations. The fire company regularly sponsored parties and dances, sometimes even weekly, including the annual St. Patrick's Day Dance that became a yearly ritual for the town's residents. The fire company was as important a social organization as it was a firefighting institution which holds true today.

On October 4, 1973, the local newspaper of the day - The Review - published an article that turned back time to recognize the fire company's 60th birthday. The article highlighted the close relationship between the fire company and residents of Seaside Heights that has existed for nearly a century. We present the article here in its entirety and in original form (without any spelling or grammatical corrections) together with some of the vintage photographs that accompanied the article when it was first published.
1913 - 1973 Seaside Heights Vol. Fire Co. No. 1 (reprinted from The Review, October 4, 1973)
The Seaside Heights Vol. Fire Co. No. 1 will be a venerable 60 years old on Oct. 9, born the same year that the community was carved out of the dunes by far-sighted developers.
From its inception to this anniversary year, it has been a volunteer organization, operating under a boro budget which provides maintenance and some equipment. The actual apparatus is primarily provided by the company through their annual raffle and fund-raising programs.
As early as Jan. 2, 1914, the Review was noting that although the "boys" of the company had put their fire bell in place on New Year's Day with appropriate exercises, money for additional equipment was needed.
"They deserve the support of every house and property owner," said owner Magill. As true today as then.
The charter members and other active firemen of the fledgling company had only been organized for three months when "they had the opportunity to show what they could do at a grass fire in Ortley." The men turned out in full force and under Chief Clarence Anthony soon had everything under control with their hand extinguishers.
Chief Anthony, parenthetically, was the owner of the most famous foundation in town. When workmen found the red-haired skeletal remains of a presumed sailor buried in the beach sand, it was decided to reinter him in Mr. Anthony's fireplace foundation.
Drilling was showing "rapid progress" in Jan. 1914 and the firemen were called out on the drills quite frequently. To this day, the weekly fire drill is a must for the company roster.

In January, 1914, the members received new badges and inspected the $285 chemical engine which had been accepted on trial. Said the Review, "It will have to be paid for and our men are ready for any emergency. In a very short time, they hope to rival any organization of its kind along the coast." The chemical engine is the company's only initial equipment.
In February, the firemen tried out their new apparatus at a "miniature fire." Noted the Review, "The fire 'boys' are certainly doing some drilling."
In March, 1914, Christian Hiering pledged the company two lots for a new fire headquarters and hall. Some stringent rules also were adopted, one of which was that no intoxicating liquors of any kind could be brought into the fire station.
In May, new hose and a new reel were added to the company equipment. And in Nov., 1914, Harry Kramer began the foundation for the $1175 new fire house. The first meeting in the "just completed" fire house was Jan. 4, 1915 and it was reported "a very cosy home for the boys."
Awaiting the completion of the fire house, the company accepted the offer of Clyde Marcy to store the apparatus in the garage under his home. Mr. Marcy emptied his lighted pipe in a waste basket one day and the trash paper fire spread to the curtains. The firemen formed a bucket brigade to douse the fire when their access to the engine was blocked by flames.
A welcome addition was the fire hydrant and the four miles of wooden water main soon to be installed by the Peninsula Water Co. Previously as the hand-drawn pumper supply was exhausted, the fire fighters efforts came to a standstill until it was refilled.
In Feb., 1915, the Company offered a contract to Roy Anthony for coats, helmets and lanterns.
The fire company, in its early infancy, began to sponsor what was to become a long line of social and not incidentally, fund-raising activities.
Dances were held every Thursday and Saturday at The Sheridan during the summer of 1915 and a March barn dance was the forerunner of the company's famed St. Patrick's Day dances. A box lunch party was held at The Sheridan in April, 1915 when bids were accepted for the ladies special lunches. And in Nov., 1914, the company met at the favorite Sumner Hotel, with a "jolly good time" following. Arrangements were made for a stag party and supper on Thanksgiving Eve.

The other unusually "jolly time" was noted on Nov. 1915 as praise was extended to Mr. and Mrs. Joseph Endres of the Sumner for their "unusually good style banquet" which featured this remarkable menu...oyster cocktail a la Endres, olives, gherkins,tomato boullion, shrimp salad on lettuce, grape claret, fillet of beef with mushroom sauce, Saratoga chips, mashed sweet potatoes, pineapple custard, cake, fruit, cheese and saltines. But said the Review in an issue a month later, "The Grand Masquerade Ball on New Year's Eve will outclass anything given before by the fire company."
The company in April, 1915, adopted the whistle at the Barnegat Ice Plant as their call to all fires.
In Sept., 1915, the whistle caused a "lot of excitement among the residents. Everybody ran to see where the fire was and took things good naturedly when they found Chief Anthony struck the alarm unexpectedly to see what the men could do. They responded in the usual prompt way and pulled the chemical engine and hose cart four squares, laid two lines of hose, each 250 feet long and made the plug attachment and were ready to turn on the water in three minutes and 45 seconds. Thirteen answered the call, with a few 'unavoidable' absentees such as Poor 'Bert' Pasco who when a fire occurs at night can only get in his help by blowing the alarm whistle till he empties his boiler."
The large crowd must have created an incentive for at the Oct. 1915 drill, only 2/3rds of the company responded and arrival and hose coupling took 7 minutes and 25 seconds.
The ice plant whistle in April 1915 brought 18 men out in rain and a thunderstorm on another "wild fire" chase. A laborer had left his supper cooking outdoors when the rain hit and an over anxious resident called the alarm. The Review noted that several firemen had had their suits ruined, a common occurrence throughout the long years of the company.

The Seaside Heights Company joined with the Seaside Park Company in Aug. 1914 in the first recorded instance of their traditional mutual aid in the event of need. The former was on the scene nine minutes after fire was reported at Bartram Osborn's garage and adjacent general store and hotel in Lavallette. Handicapped by a lack of water, the building could not be saved, but surrounding properties were saved and much credit was given to the firemen for their efforts.
In Aug. 1914, the company asked council to prohibit beach fires more than 100 feet from the water line due to the danger to cottages on west winds. Popularity of the beach fires, marshmallow and potato roast parties, it was noted, would not be curtailed as the council had no desire to "curb legitimate amusements of cottagers," but the ruling was placed in effect.
In Dec. 1914, however, the firemen were called out as fire destroyed one of the buildings of the Berkeley Fish Company on the beachfront. Said a Review report of the firemen's actions: "Firemen, regardless of their own safety, went to work with a grim determination to extinguish the flames before they spread. They cut the burning lumber connecting the building with another structure and played a powerful stream of water on the latter. With a rapidity that proved how well the men were drilling, they trained their hose on the danger spots and soon extinguished them. By this time, however, the lumber had been dried and flames burst forth from all parts. Some fishermen who were asleep and were unaware of the fire were rescued by Chief Anthony. There was not one of the firemen missing and Christian Hiering, with possibly one exception, who lives farthest from the scene, was one of the first on the ground. To engineer George Hauser, who handled the water supply from the plant, much credit. There was 15 feet of water in the tank at the time the fire started and he used the pump to such good effect that when the fire was over, there was still 10 feet left. Although the fire was under control when they arrived, the company sent letters to the Seaside Park Fire Company for their response. Mayor Kramer treated the visitors to cigars."
As the town developed, so did the fire company. In 1928, a $7,000 fire truck was added as the town acquired a new school, sewer system, boardwalk comfort station, bayfront pier, concrete boulevard, land for a municipal building, a new lighting system on the Boulevard and Hamilton and a new 383,000 gallon water standpipe.
In 1928, Adelbert "Dell" Hopson, joined the company as a junior fireman, moving up to regular grade in 1930. He served as secretary for ten years and in 1943 was elected Chief serving until his retirement in 1972. He has been active in the State Fire College and has been credited as the motivating force behind much of the volunteer professionalism in firematics throughout the county and state. Mr. Hopson now serves as president of the Eastern Assoc. of Fire Chiefs.
In Sept. 1950, the fire company moved into its present headquarters in festive Seaside Heights Day celebrations. The occasion included a parade and cornerstone laying and unveiling of the plaque for past and present firemen. Speeches, tours, free refreshments, fireworks, and 2,000 free balloons completed the day. 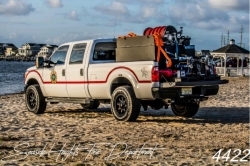 Copyright © 2006-2020. YourFirstDue Inc. All Rights Reserved. Designated trademarks and brands are the property of their respective owners. Content on this web site is supplied by Seaside Heights Fire Department. YourFirstDue Inc. cannot be held responsible or liable for any content, text, pictures, or any other media found on this web site. Maintained by the members and staff of Seaside Heights Fire Department.
Management Login
Powered by